The Dekatria Project - Starting up... 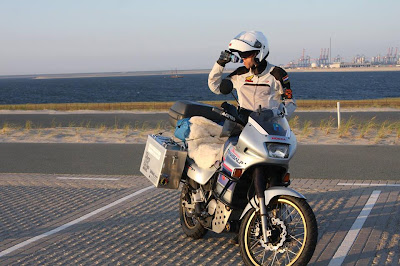 After going through Hell and back in 2010, I thought it was about time to finally see the country of my dreams: Greece. The ordeal that followed became The Dekatria Project - the mission of riding to Greece (and back) in 2013. I chose to get there by motorcycle... but there was a catch: I didn't even have a driving license yet, let alone a motorbike of my own.

But how to start such a vast undertaking? To get my bearings straight, I divided the project into 3 phases. The first focused on my license, the second was for preparation, the third was the actual journey itself.

The first phase started the 13th of October 2010. That was the day I passed my Driving Theory Exam, allowing me to start my driving lessons. Partially as a joke referring to the date but moreover as a remembrance to my old friend, I wore my 2010 World Cup shirt (see 'The Story') that day... and after I had passed, I wore it every other test as well. 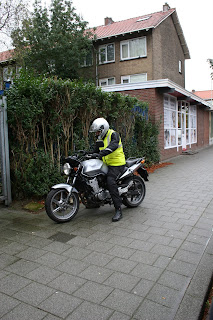 The first driving lesson I had was 10 days later, on the 23rd of October 2010. A very powerful moment - I had taken the step of making my dream reality, and from that point on, I sure as hell wasn't going to stop until I had successfully accomplished it.

This wasn't going to be an easy feat however, since a motorcycle license is one of the most difficult to get in The Netherlands. You need to pass three exams (two practical, one theoretical), whereas a car license just takes two.


Through the lessons that followed, I sometimes lost sight of what I was doing... but reading back the story behind this project always got me back in gear.

I remember getting hit by a car as I was cycling back from university, just an hour before a driving lesson. As a result my entire left side was covered in wounds, but I didn't seem to care - I improvised some bandaging, put on my suit and turned up at my driving school... where my instructor looked at me in disbelief when I said I was good enough to ride. The way I saw it, no bones were broken, and some blood wasn't going to stop me.

A few weeks later, the 18th of April 2011, I passed the first of two practical exams, and 6 months after, on the 10th of October 2011, I passed the final one. This concluded the first (and hardest) phase of the project; that of getting my license. The project could now start to take shape - the Dekatria page (this website) was launched, and I had already contacted To Write Love On Her Arms as I reckoned it appropriate to let the trip also contribute to a charity. Now, things could really get going.

The second phase is all about preparing for the ordeal I've laid out for myself. Riding a few thousand miles isn't something to think lightly about (especially if it involves countries I've never set foot in) so I'm not just going to ride off into the sunset now I happen to have a license. 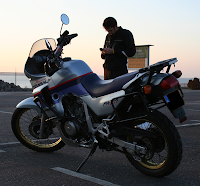 First stop in this phase was to get the wheels. I always had a strong liking for the pre-millennium Honda Transalp, and 12 days after getting my license I bought one - a 1999 Honda XL600V Transalp. The previous owner had done some considerable work on it already whilst also doing a fine job in keeping the bike in pristine condition, making the purchase pretty much a no-brainer. The following weeks were used to get to know the machine both on the road, and from the inside (tinker-time!).

Now, some equipment needed to be added to the lay-out as well. From Touratech, two ZEGA cases were ordered to provide enough luggage space on the Alp, and a Drift helmetcam was purchased to document the rides.

In May 2012, I first did a smaller testing trip through Northern Holland to see how the bike and me handled all the extra weight, and in July 2012, I went on a tour of Great Britain (see "The Tour of Great Britain" for that) to familiarize myself with long distances abroad. 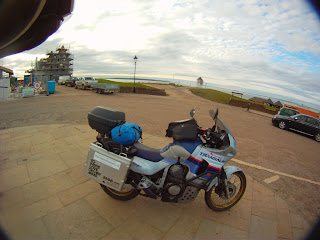 Concluding, this phase should function as a proper 'dress-rehearsal' for what was to come in Phase 3... the journey all the way down.