The 2012 Tour of Great Britain 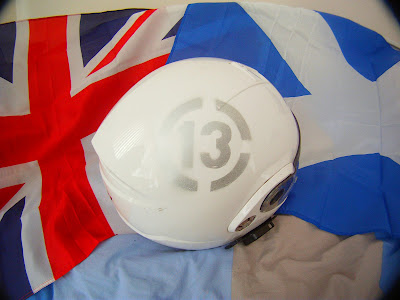 As preparation for the 2013 ordeal, I thought a 'dress-rehearsal' trip in 2012 would be in good order. I reckoned it best for it to be done in the same time of year (July), and after some deliberation my first choice for a destination was Great Britain as it presented alot of the obstacles I'm likely to encounter going to Greece. There were also alot of things I still wanted to see on the island, and it would also give me some proper experience with true long distance touring.

But wait, there is more!

Just like with the project's main trip to Greece, there's more than meets the eye. The trip was also in honour of my grandfather - at the time of the trip he was 83, and his last wish was to see Scotland.

His health didn't allow him to do it anymore though, so I thought of a plan in spirit of the 2013 plan; I took a Scottish flag with me,
let the people that I met on the way write a message on it, after which I gave the flag to my grandfather when I returned home (visible in pic). This way, he would meet everyone I met on the trip.

When and where to go?

I left on Friday the 13th of July 2012, taking the ferry from Hook of Holland to Harwich. I returned back to Holland the 22nd of July for my father's birthday. The route would take me from Harwich to York, Edinburgh, John O'Groats, Durness, Kinlochleven, the Lake District, Liverpool, Snowdonia Nat. Park, Cardiff, Bath, Chiseldon and London back to Harwich. Over 2200 miles, in 8 days, right through the hearts of England, Scotland and Wales.

Seven weeks after my grandfather had received the flag from me, he passed away. In the Spring of 2013 Heiko Spaans (a riding buddy of mine) went on his own Tour through Scotland, and I gave him a small canister of my grandfather's ashes to scatter anywhere he deemed particularly beautiful. He was happy to oblige.
Gepost door Greg op 23:47