Day 6 - Kinlochleven to the Lake District, passing through Glasgow

The next morning bode well from my point of view, since I heard the clattering of raindrops upon the blue veil of my tent. And rain usually means, no mosquitos! 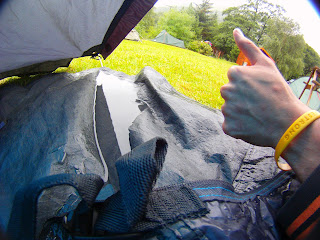 Yet, something inside me told there was lurking something more sinister outside the safe walls of my tent, carefully laying out a trap for the moment I felt safe enough to venture outside again.

For precautional security purposes, I readied the heavy artillery. 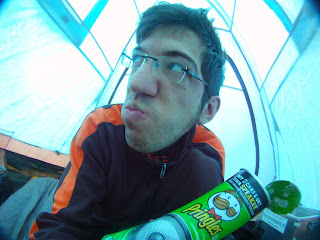 What followed was... well... a war. Now being Snicker-less the midges saw their chance, and the very second I stepped outside the swarm double-timed their offensive. I still had to pull down my tent, and even though you can do that at a walking pace dampening the midges' offensive capabilities, I ofcourse had to put the rolled up tent in its sack.

Now, my tentsack is one of those few things in the world that is perfect. It's perfect in the way that it has the exact dimensions of the rolled up tent it contains. And by exact, I do mean exact - only when firmly squished to a near vacuum-state will the tent fit inside of it, making the task of putting the tent in somewhat time-consuming, though satisfying upon completion.

But this morning, there was no time, no space... and no mercy. Because of the midges' relentless attack, I first forgot that my sleeping bag was still in the tent when I rolled it up, making the roll far too large to fit. I took it out, rolled it up again... after which I figured that I probably would not survive taking the time to squat down and put the tent in its bag. I thought not to bother, put the binders around the tentroll, strapped it on the bike, threw the sack in the topcase and fled the scene.

And when I say 'fled', I do mean 'fled'. It was ofcourse still raining, and backing up a fully-laden Transalp on loose gravel whilst midges rain terror from all sides, your three layers of clothing make your insides boil and the rain itself makes your visor fog up can only be described as nothing short of a nightmare.

Only when I had found a spot with wind did I take the time to put the tent in its sack again. This was in the southern end of (the very beautiful) Loch Lomond, over 60 miles away. Only then did I realise I had already paid for breakfast at the accommodation I had just gunned away from. My priorities, so it seemed, laid somewhere other than a filled stomach. 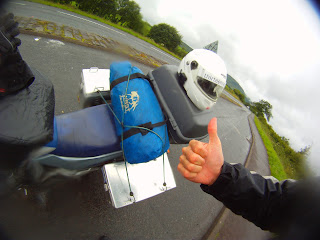 Nearing Glasgow a bit later, I thought it was wise to make amends with my stomach, and pulled in the parking lot of an M&S. I was running low on cash, so I asked the lady behind the counter where there was an ATM somewhere. "Are you from around here?" she asked. "No, I'm Dutch". "Yeah, I gathered from your accent that you weren't local". She pointed out one near a big nearby intersection, which seemed a bit complicated but, as she put it "You're braver than me since you're on a bike, so you'll probably find it". 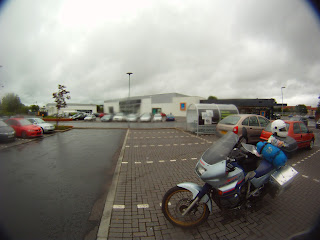 And indeed, I found one soon after. Time for me to go through the city centre, and find the one thing I wanted to see in the Glaswegian realm... 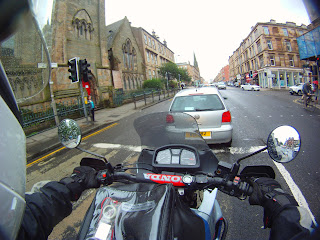 ...the stadium of the forlorn Rangers FC. A beautiful stadium I must say. 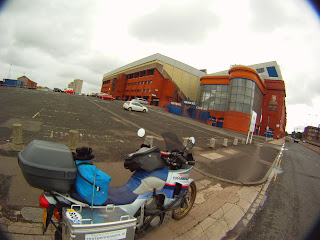 From there on in, it was time to say goodbye to Scotland. It had been (save the midges and uh.. one sharp turn) tremendously good to me, and if I have a say in the matter, I'll be sure to return one day. Those lands are a biker's dream. 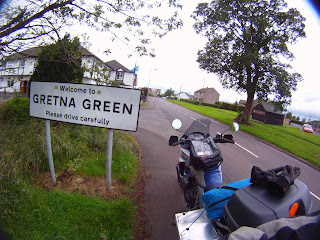 Back into England then, where I noticed at a motorway services that (probably because of the plentiful rain and gunk on the road), my Scottoiler had temporarily stopped working. I cleaned it as well as I could (no easy feat as the unit was behind the panel blocked off by the stuck pannier), and lubricated the chain with some WD40. For the remainder of the trip, I kept a close eye on things... but later on, the system seemed to be back to normal.

Time for yet another bunch of beautiful biking roads lined with scandalously soothing scenery: welcome to the Lake district! Both left... 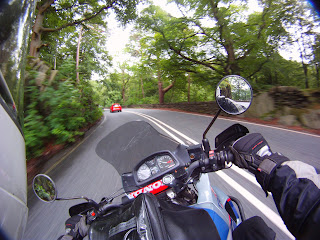 ..and right the perfect place to sort out your chickenstrips. Yumyumyum. 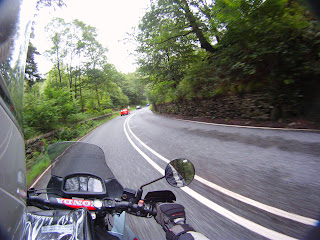 And then you're in Ambleside! A small town in the middle of the park, where I asked directions to my camp site to push the final stretch. And this was harder as it seemed, since the map the Tourist Information shop supplied me with wasn't particularly helpful. And when I say 'not helpful', I mean 'this is the town, you have to take this road out towards it but then you have to take another turn which is not on the map nor will we tell you about it'-not helpful. 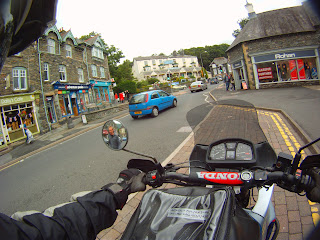 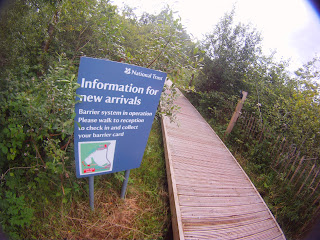 Still, that didn't matter to me. In fact, the remote-ness was quite welcoming, as this camp site in particular must be one of the most beautiful I've ever camped at. 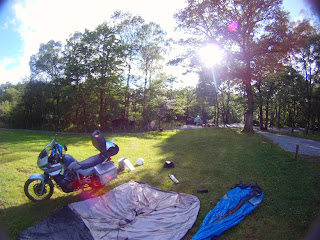 Even my arms seemed to agree, as they started to resemble said countryside. 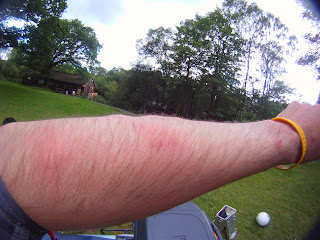 Still, I was ofcourse oblivious to what would still follow. I cooked up dinner, and went to sleep... this time, with no midges or mosquitos in sight. Whoo! 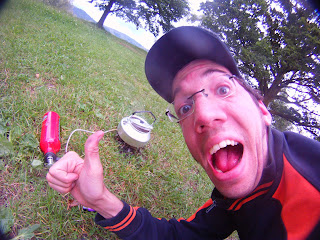 Here's a clip of Cumbria at its finest, just having entered the Lake District. Tomorrow would be the shortest leg of the tour, going towards Liverpool and Wales into Snowdonia National Park!