I have to say I felt pretty relaxed, waking up at the edge of the Atlantic after 9 hours of complete comatose stasis. And yet again (opposite to what I was expecting) the weather was kind to me. I cleaned up camp, let my neighbors and the people who ran the camp site sign the flag, and set off in a westerly direction. 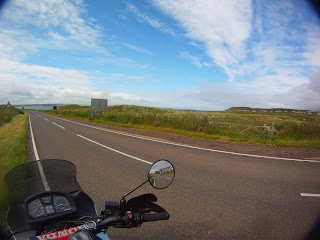 But as the roads rolled into the mountainsides, my luck with the weather just sort of... ran out. 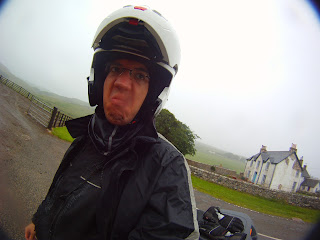 Still, a few raindrops don't get the better of me... and the scenery just kept on improving. 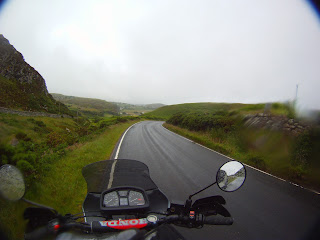 By this point the single carriageway had dumbed down to a single track road, with passing places every 100 metres. This didn't seem to matter a whole lot though, as I would go miles and miles without seeing another soul or house... 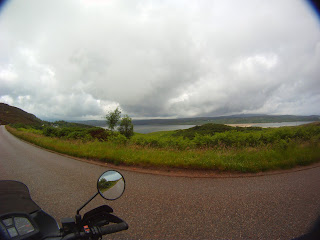 ...let alone a petrol station. I filled up just outside John O'Groats, but after that... well, just read my tripmeter (the lower counter) to see how many kilometres it took me to come across another petrolstation. The one after that was even further. 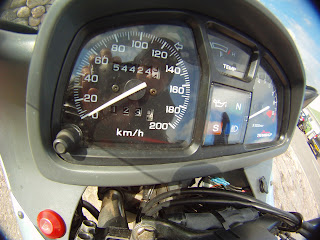 The appearance of the fuelstops themselves also quieted down, going from the normal services back near Edinburgh, to a pump with a wooden door in a garage, till the only thing I came across was a station with 1 pump for Unleaded and 1 for Diesel, sided by a wooden shed. The guy running it just read the amount off the pump, and you had to give him the money. Still, great service (he did the pumping for me), so I couldn't let the flag go unsigned here as well! 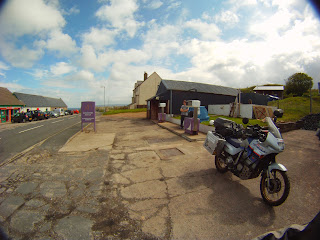 After Durness, it was time to go back South again. I eventually entered a road (still, single track with passing places like the below pic) which was also used by logging trucks, so you can imagine my surprise when at one time you're casually ooh-ing and aah-ing at the scenery at a steady 60mph, only to get scared to death by a several tonne behemoth carrying someone's future furniture the next. It wasn't helping that it's so easy to get distracted around here. 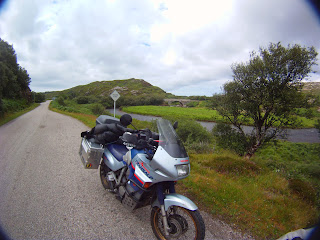 Still though, after some thorough riding entertainment, I found myself riding past Inverness, to take a break beside the home of a monster. Loch Ness! 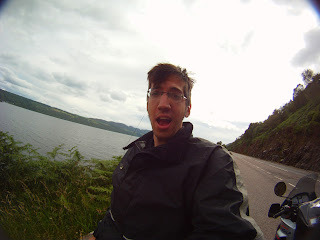 The roads siding the Loch were also a dream to ride, the only downside being that being a single carriageway in an area with alot of trees, blind hills and sharp turns, you can't really pass any slow traffic without defying death. 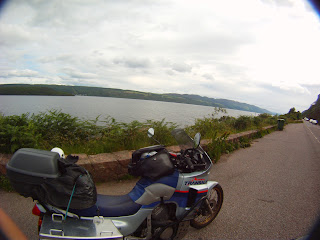 I also got pretty hung up about my rear tire - as the roads are pretty bad up North (and I like gunning it through them turns, heehee) the profile was going faster than I thought. I checked tire pressure again, and hoped for the best.

When I arrived in Kinlochleven, the first hotel/camp site at the side of the road seemed pretty appealing. They had everything I needed - food, a place to camp and internet, so I rode through the entrance still oblivious to the perils that laid behind it.
As I parked my motorcycle, I checked in, paid, after which I saw the entrance to the camp site - a small wooden bridge, totally impossible (and thus probably illegal) to cross with my beast. I got the impression that my decision to stay here was to become the biggest mistake of the trip so far.

And I wasn't wrong. As I brought the bike around and parked it near the bridge, I got my first taste of what would be (and which, at the time of writing this a week later, still is) the greatest terror Scotland bears within its realm. Midges. Up until now, I had always stayed at places where there was wind, so there'd be no midges. But this time, I was smart enough to stay in a valley between two of the highest mountains in Scotland... so there was no wind, be it for a weak breeze. No wonder then that within seconds of putting the bike on its side stand, the bastards were all around me. 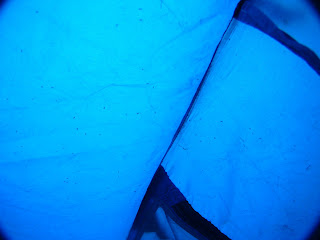 Midges are basically mosquitos the size of a fruit fly, which don't attack you individually like the regular Dutch mosquito, but do it in swarms. In the first few minutes, you don't really mind too much... but when after 5 minutes you find yourself unable to think of the next step in setting up your tent because each time you stop walking you're surrounded by a swarm of pestering diabolical inventions, you tend to lose your normally Zen-like patience somewhat.

I eventually got so fed up, I picked up my half-finished tent from the beautiful side of the lake and dragged it to higher (thus slightly windier) ground. I put up the rest of the tent from inside, just to stay out of harm's reach... and it worked.

Then again, the midges had probably noticed I possessed the kryptonite to their existence: a Snickers bar. 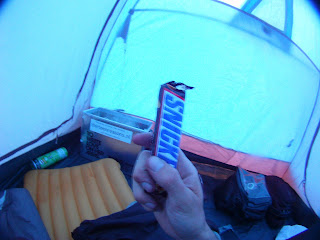 No wonder then they were nowhere to be seen within the realms of my sleeping confinement. 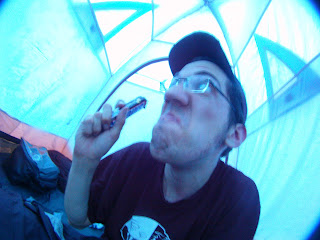 But ofcourse, I surrendered to my one vice. I got hungry, and I ate the Snickers... enabling the Midges to deliver their wrath tenfold the next day. Probably the second biggest mistake of the entire trip, as I would soon find out... but more of that tomorrow, when I'm going further down towards the Lake District!

Here's a clip of the road into Kinlochleven.