Waking up at the Squires camp site I noticed that it had gotten quite warm in my tent... and as I exited my tent my suspicions were correct: sun! Gary and Hazel had already been out to run a few miles - I gotta say I admired their discipline whilst being on a motorcycle-camping trip. I had myself a good breakfast in the pub (for a good price, I must say), worked out my new hi-tech nav-system for on the road, said goodbye to my neighbors before mounting the beast amidst a sea of bikers, and riding on.

Eventually, I came across a traffic jam. This presented me with a problem - normally when there's traffic in the Netherlands, I filter through without a moment's pause. But this time ofcourse, I had two aluminium boxes mounted to either side of my bike, making it alot wider. Would it even be possible to fit the beast through the gaps this time around? I quickly decided the best way to find out is to try, put on my hazards and went for it. And it went as smoothly as always - I just stuck to the golden rule of not going through a gap I doubted was big enough to fit through, and all was well.

That well in fact, that when the going got pretty narrow and another biker on a sporttourer (wthout panniers, mind you) was waiting in line behind a car, I just passed him as I filtered through, as if I was to say 'Go on then, there's plenty of room!'. He agreed so it seemed, because when I looked into my mirrors a bit later, he had joined the biker convoy I was leading through the traffic jam. 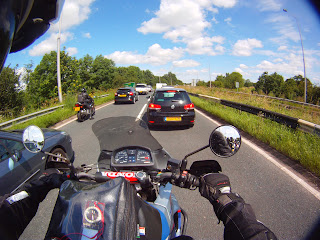 Eventually I made it into Scarborough, where I filled up both the bike and myself and also checked tire pressure. Just took some time to relax, before setting off to Whitby... and the roads leading upto Whitby (situated in a national park) were a small taste of what awaited me later on in the trip. Hill after hill, turn after turn, and biker after biker. I chose to check out the centre of the beautiful town, but after spending a few minutes in traffic with a painful clutch-hand, I took a turn into a suburb and asked at a house whether I could go to the bathroom. No problem! 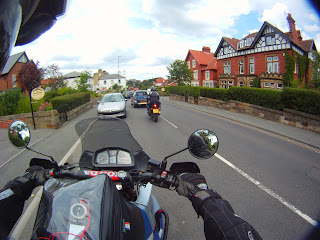 I worked my way through Middlesbrough and Newcastle, and then the first real destination of the day beckoned. Holy Island. It's one of the few places on Earth only accessible by a tidal road, so I just had to pay it a visit. As you approach the junction on the A1, you can see the island in the distance in the sea. Turned off the A1, and a small country road eventually brought me to the road submerged by seawater when tide is in.

As I rode over the bottom of what normally would be the North Sea, I was overcome by the power of the moment, and found myself cheering inside my helmet. I didn't stay on the island for long though, knowing I still had a long way to go. Just made a few shots with the Drift, gathered my thoughts again, and headed back. A truly beautiful place, which you should really visit if you're in the neighborhood. 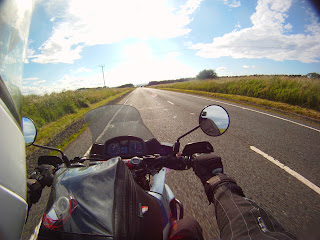 After Holy Island, the border with Scotland was so close I could smell it... so I gunned it, and eventually I was standing beside a huge sign beside the road welcoming me into Haggis-land. This was the second powerful moment of the day... and the weather was very nice as well! 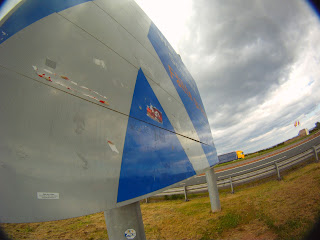 (I swear I have no idea how that sticker got there)

For the rest of the day, I just wanted to get to Edinburgh, going 70mph for most of the time. At one point I was reminded why to be vigilant though, as a group of cars in front of me suddenly braked - the cause being that a few gardenchairs had dislodged themselves from the roof of one of the cars, and were now lying in the middle of the road. I thankfully saw everything in time, braked, carefully steered around it and powered on. 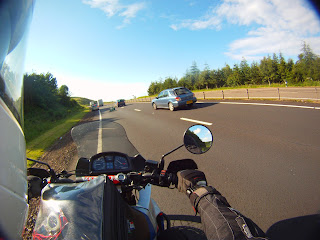 I was relieved to eventually make it to Edinburgh, but doing over 600 miles in 2 days had taken its toll on me. As I filled up at a petrolstation inside of Edinburgh, I didn't feel like looking for the camp site and setting up my tent. 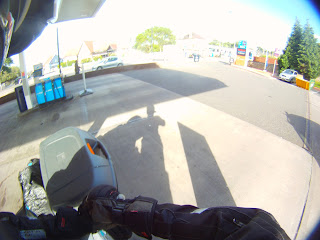 Luckily, the fuel-stop was sided by a hotel... so I informed whether they had a room available, and checked in. I had enjoyed myself as I'd hoped, and tomorrow, I would ride further North, through Cairngorns National Park to John O'Groats. But it would also be the day of the crash...

Further pics are ofcourse at the project's FB page. Here's a vid of the tidal road of Holy Island, riding from the village across the sea-floor towards the shore. Enjoy, and see you tomorrow!