The coming days, each day a day's report from the Britain Tour, with extra videos, photos, and at the very end a video compilation! Today:

The days prior to launch I entered a state of near neurotic psychosis. I knew everything was pretty much in tip-top order, but still I drove myself crazy upto the point of also tightening every spoke in the wheels. All you really want is just to get going, because the waiting was just slowly driving me nuts.

My boat would depart at half past 2, with check-in limit at 45 minutes prior to that. However, I got so anxious I eventually ended up half an hour early, entering check-in way early.

On ferries you have to tie your bike down ofcourse, and for that purpose I'd brought a few straps (they supply straps for you, but I don't like being dependent on supplied material). In my psychotic mode I purchased another strap however, because it had hooks on it. This ended up being a smart move – not because of the hooks, but the German straps were too short to tie the beast down over the seat. The bigger one I'd bought days before the trip however, had room to spare.

With the beast in gear, a jammed-on front brake, chocks at the wheels and three straps holding the Alp in place, the boat could've probably entered a wormhole without the bike moving as much as an inch. Just when I was going to go to the living deck, I stood back and looked at the beast, smiling to myself. After everything that had happened, I was now finally on my way. 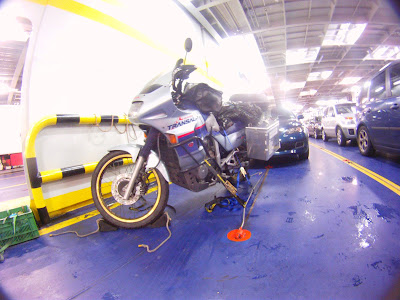 On the boat I met a Dutch family, which traveled with three kids through the midlands toward Liverpool – alas, the first candidates for signing of the flag! Coincidentally, their return ferry-trip was the 22nd as well. I busied myself with doing the roadbook for the first day, and whilst doing so I was joined by an older man, who asked to show me where I was going and immediately told me where to go and what to miss. He had just completed a trip with his son, going with a campervan from England to Poland and Denmark. And thus, the flag was signed once more. 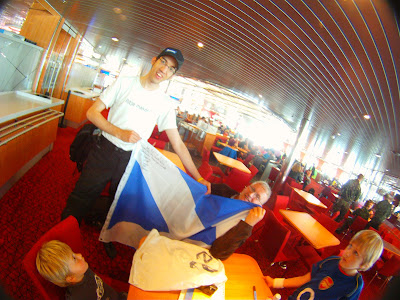 There was plenty of sun upon arrival in Harwich, and as I rode off the ferry, a Dutch couple with a hacked Harley rode in front of me. It even had a suicide-shift, how cool's that? With some luck, I found the overnight stay pretty quickly, and before long I was joined again by another dutch couple riding their bicycles from Holland to Land's end before taking a ferry to France.

During the night, it started raining, and just when I had finished packing my tent the next morning (I just wanted to get going, actually) it sort of stopped. Nevermind then! The proprietor's reaction to my destination the next day was quite simple: 'Focking hell!' Little did I know what he meant with that. 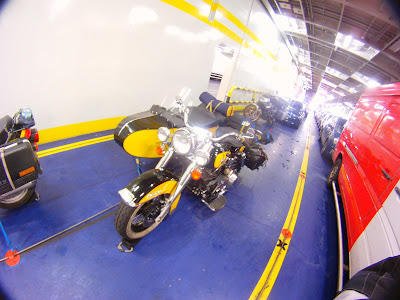 The first miles went pretty well, but after Ipswich...well, let's just say that if you see the sign 'Welcome to Suffolk' for the third time in yet another different location, you know you need to go find the motorway. And that's what I did. Things went pretty smooth from there on in... and before long I was really close to my destination. I also noticed that I'd also miss the one sight I'd planned to see on this day were I to continue the way I did... so I took a detour, to see Humber Bridge.

And I didn't regret it. Coming from the South, you can only see it just when you're about half a mile near it, coming over a hill around a bend. Awe-inspiring, that's a good word for what I thought of it... I almost thought I was in San Fran. And there's no toll for bikers too!

Going into the final stretch towards my first accommodation, I noticed that the further North I got, the more impossible people's English became. I thought that, being a teacher of the language, I'd be used to one thing or another... but one fuel-pump attendant had to repeat herself three times before I understood what she was saying, hahaha.

After a bit of a look-around I found my camp site: Squires Biker Café. It's basically a huge bikerpub where you can eat, drink, play pool and (in my case) also camp. Very good location, and lots of bikers too... quite ideal, from my point of view.

On the camp site behind it I met the British couple – marathon runners Gary and Hazel, who came from Ipswich and who were just away for the weekend on their (immaculate-looking though thoroughly-used) GS. Gary was affluent with stories of the trips they'd made – I liked the one where they visited Spain and Andorra on the same day, returning again because of the crap weather... thus giving them a pic of the bike under a palm tree and in the snow, taken on the same day.

They also signed the flag, and being an avid collector of country stickers on his panniers the project sticker soon find a new home as well.

Myself, I was totally wrecked after over 500km on one day. That much in fact, that I didn't know whether I would be able to do the entire island in the week to come. No, my morale was pretty much shot to pieces... though two cans of Coke seemed to bring me back to life again. I knew that tomorrow would be better, since both Holy Island and Scotland awaited. Gary advised me to fill up in Scotland whenever I could, since fuel-stations were few and far between. A useful piece of advice, I found out a few days on.

But more on that the coming days. In tomorrow's report, the Sunday of the trip, entering Scotland going toward Edinburgh!

Pictures can be found on the FB page. Here's a clip of entering Squires – gives you an idea of how big the place really is.