Waking up in Edinburgh, I was glad I had chosen to stay in a hotel for the night. I could get everything in sync again, and prepare myself for the final push towards the North. The route today would take me from Edinburgh to Perth, through the Cairngorms National Park past Inverness to John O'Groats, at the very top of the British isle.

Yesterday, I'd spoken to the lovely hotel receptionist Natalie, who didn't know something to write on the flag - we agreed she'd think about it, to write her piece the next morning - and so she did, in Gaelic no less! I said my goodbyes soon after, and powered on. In no time I was at Forth Bridge - another awesome piece of engineering. 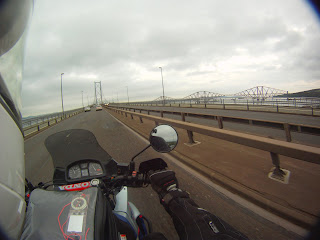 We haven't got bridges like these in Holland. And this was my second one on this tour. 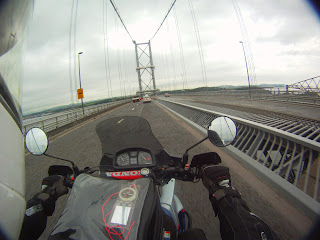 Going past Perth, I found myself slightly diverted from my original route - no matter though; I turned off (at one of those periless junctions that all of those A roads have in Britain) and a small country road eventually brought me in the heart of Cairngorms National Park. The fun had started - I experienced that most of these swooping 60mph mountain roads are basically one giant playground for motorists, filling you with awe with its scenery on one moment only to scare you with some unforeseen tight turns the next.

It was one of these turns that got the better of me. Just after a stop in the nice small town of Tomintoul (where I met a bunch of other international riders - more flag signing!), one turn jumped me when I wasn't expecting it. The road made a sudden 20% drop, a sharp right turn followed by a sharp left - I managed to keep the beast upright after the first turn (albeit slightly going offroad), but the sharp left came too soon. I shot across the road, into a muddy ditch. 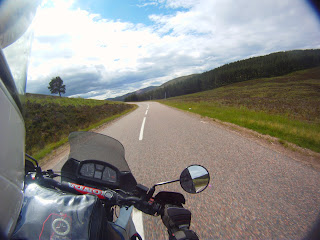 Just 29 seconds before the crash, everything being as fun as ever... 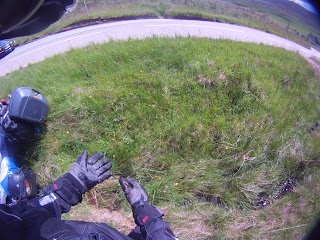 ...and then this. "You moron," I thought, "now it's all over". The very nice man driving behind me with his family stopped immediately, and helped me get the 400+ pound bike upright. All the people passing by stopped as well, and with a crew of 7 we pulled the Alp out of the ditch. I tried to start the bike, and after some hesitation (the bike had been on its side, ofcourse, and the bike relies on gravity to fuel the engine) it fired, as if the beast was saying "YOU CALL THIS A CRASH? ONWARD, YOU PUSSY!". 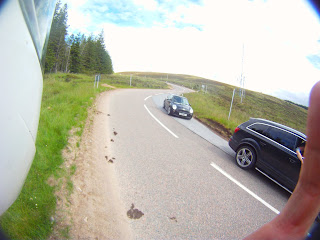 At the top of the mud trail is the place where I went off. The man driving behind me offered to stay behind me, so if anything would be wrong with the bike, he could take me to a garage. 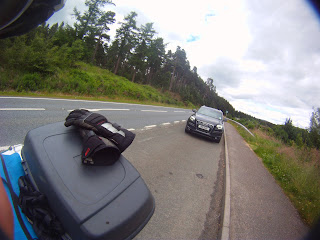 But after some miles of looking, feeling and listening, I couldn't find anything out of the ordinary... so I pulled our convoy over, thanked the man wholeheartedly and let him continue on his way. Thankfully Jeremy Clarkson, not all Audis are driven by cocks ;) I had a walk around on the bike, checked switches and lights, but apart from my left pannier rack being bent inward rendering the left pannier stuck and my frontwheel taking some Scottish soil with it as a souvenir, the bike was fine. Let's hear a hurray for Japanese reliability! 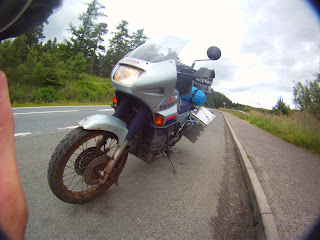 As I continued, I was glad I had tightened all spokes in the wheel before departure, making the wheels as strong as possible. They probably would've looked alot worse if I hadn't done that. Also, the crash bars at the front also saved me alot of damage as well... gotta love'em ;) Anways, time to continue, on to John O'Groats! 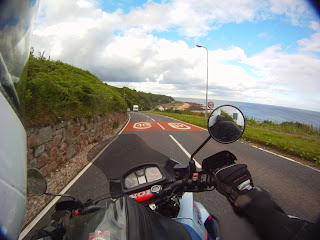 Yet more moutainous roads... this time at the coast! 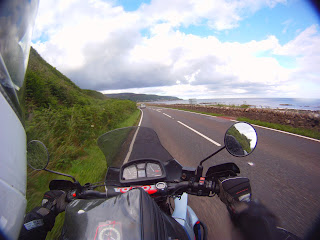 Mind you, I was still shaken up over the crash. If the muddy ditch had been a brick wall, rock face or something else immovable, I probably wouldn't have been riding where I was. Only when I arrived at my destination had my thoughts calmed down a bit, and could I continue to enioy my trip again. 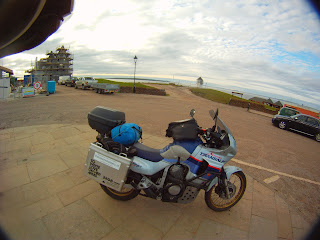 I probably haven't ever been as glad to make it somewhere as I was when I rolled into John O'Groats. The day had been a testament to the nature of the Scottish people, and the perseverance that got me there in the first place. I had done a massive stretch of road today, but setting up camp hasn't ever been as easy as it was in John O'Groats.

Tomorrow, I would go across the very North of Scotland, toward Durness, and then back South toward Loch Ness and Kinlochleven. Little did I know that I had yet to encounter the Scottish terror of the midges, and that scenery-wise, the best had yet to come...

Mind you, Cairngorms got pretty close. Here's a clip. Further pics ofcourse on the FB page.