During the night in Stöðvarfjörður I was woken up by the sound of raindrops on the outside of my tent, or so I thought at least.

As it turned out, the source of the sound was entirely different. 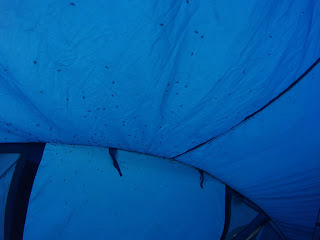 Apparently, I'd left front of the tent open during the night, and a horde of Icelandic flies had come in to tango and bang their heads against the wall in unison. 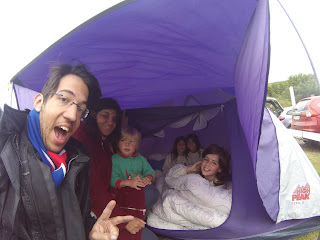 The evening before also saw another addition to the camp site. Elke, a German mother, was traveling through Iceland with her 4 children. The station wagon was loaded up with anything one could imagine, including a gas bottle (and stove) for cooking. 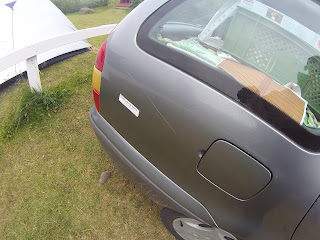 The youngest of the kids promptly saw fit to give the project sticker its rightful place onto their car. 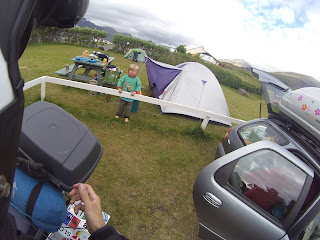 I said goodbye to the family... 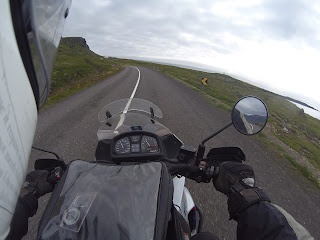 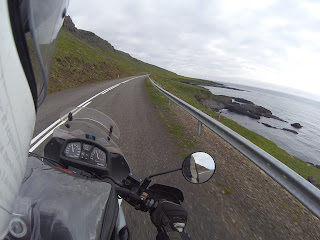 Now, I was getting quite near to completing the lap of Iceland by now, and I suddenly realized that I had succeeded without any real drama. Sure, there was the time I was blown off the road at speed which could've ended really nastily, but other than that, it had been pretty smooth sailing throughout. 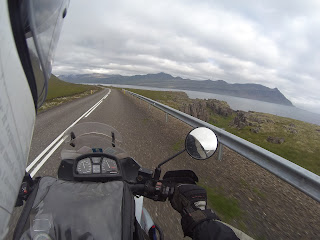 The brilliant scenery also wasn't letting up, apparently. I had been recommended by an Icelandic person on the ferry to visit the Eastern fjords, so I had set course to the Eastern city of Neskaupstaður. 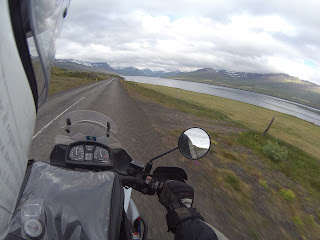 I had even gone as far as booking somewhere for 2 nights, since I wanted to sort out some of the Drift's footage and get everything sorted for the ferry back home. 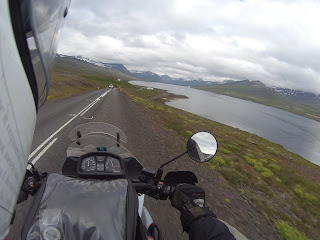 Just outside of the town of Eskifjörður though, the trip's share of drama befell me at long last. 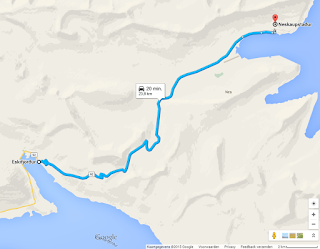 As you can see, there's only one road leading into (and out of) Neskaupstaður, and it goes over a mountain, with a single-lane tunnel at the top. I had put the camera on video stand-by as I knew about this, and that the road in question would probably deliver some spectacular imagery.

Just when I wanted to stop beside the road to activate the camera, it fell out of its mount, and fell on the tarmac at speed. The camera itself survived the drop just fine, but its lens was shattered, the rear hatch was buckled and the Gorilla Glass screen had popped out to disappear among the weeds at the side of the road.

I can tell you now that, specifically since it concerned a borrowed camera, many expletives echoed through the fjords at the bottom of that hill. 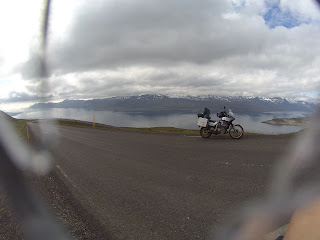 Just to twist the knife a bit, this turned out to be the view awaiting me. 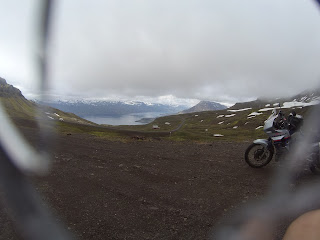 This was at the tunnel's entrance, all the way at the top of the hill. How typical for the camera to break with this up ahead. 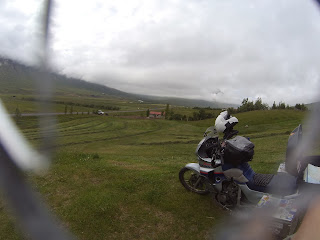 I ended up at Skorrahestar; a horse-riding guesthouse where I'd booked for 2 nights in advance. It's a family run establishment, and as a result I was immediately received with open arms and a hot cup of tea to warm myself up a little.

Now normally the best places to stay are usually with locals, since they know a lot more about the surroundings and are able to show you places you would normally miss. For this trip, I always regretted not having planned such a stay, but on the brink of my imminent departure Skorrahestar delivered in spades.

The company is run by the family of Thea and Þórður Júlíusson, who started taking people out by horse and have since expanded into a guesthouse. Thea was more than willing to tell me all kinds of stories regarding the place I was now staying, including some of the local history. 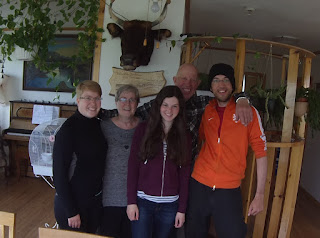 Thea filled me in, informing me that at first the nearby city of Neskaupstaður was named after the fjord it was in (Norðfjörður), but the strong socialist community within the town changed the name into Neskaupstaður.

This name can be dissected in the following manner:

A 'Nes' is the very tip of the fjord', 'kaup' relates to 'buying' and 'staður' is place. So in other words, the name simply states it's a place at the tip of the fjord where you can buy stuff, probably referring to the city once only being accessible by boat, and being a stop-over for ships arriving at the western Icelandic coast.

In any case, this new nomenclature divided the people living in the fjord into two camps - the ones in the city want keep the current name, but the ones living outside the city would rather have it changed into the name of the fjord (much like  most of the other fjord-cities in Iceland), because they don't live in the city and thus don't feel any connection with it. 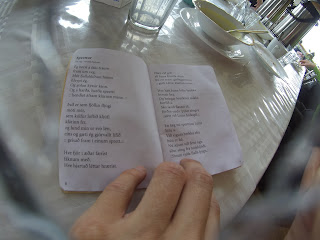 To my complete surprise Þórður even took out his guitar and sang a few songs. This immediately activated the linguistic nerd inside me, since Icelandic sounds remarkably similar to Dutch in terms of melody and yet I couldn't understand a thing.

Now, both the Þ and ð are transcribed as 'th', but I had figured out that the difference was in their pronunciation. The  Þ is the 'th' in 'thin' - just use your index finger and thumb to softly pinch your adam's apple, and you will notice that when pronouncing 'thin', your adam's apple does not vibrate when you pronounce the 'th'.

This is different for the ð, which is the 'th' in 'these'. If you now pronounce 'these', you will notice that your voice vibrates. This is what linguistics calls the difference between 'un-voiced' (or fortis) and 'voiced' (lenis) letters. Examples of pairs like that in English are p-b, s-z and f-v. 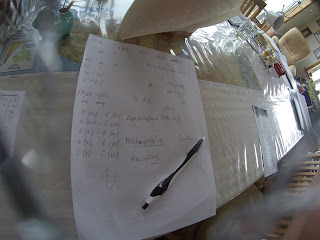 Thea helped me get to grips with some of the other Icelandic sounds. My inner nerd was running completely amok at this point. 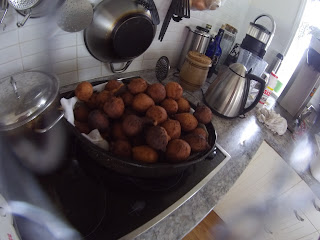 To my complete amazement there were even oliebollen at the table - something that is considered typically Dutch but of which some people believe they have their roots in Pagan or Germanic times, which would explain why I now found myself eating them in Iceland. Thea said that most people make them with raisins, but she didn't as some people don't like them then. 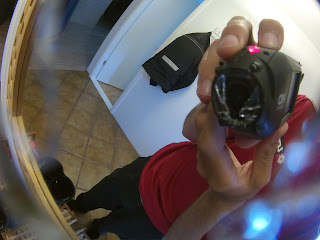 The camera looked worse for wear, but was still functioning perfectly. With the upcoming rain though, I kept it in a plastic bag, only to be taken out when there was no rain. 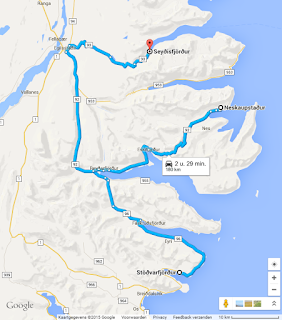 There was only one leg left, in Iceland - the final 90 kilometers back to Seyðisfjörður. This may not seem like that big of a deal for someone who can ride over 300 kilometers a day for 4 weeks straight, but ofcourse, this time matters were a bit more complicated.

Now, you might remember those awesome photographs I showed you earlier, of that gorgeous view right before the entrance of the tunnel that leads towards the fjord of Neskaupstaður. Thea told me that if winds were 30 kph or stronger, this mountain pass became so dangerous even trucks could be blown off the road, being sent into the abyss below.

The day before I left, the winds were exactly that speed, 30 kph... and that road is the only one out of the fjord. In other words: if the wind speed wouldn't drop, I could not make it to Seyðisfjörður the next day.

Reluctantly, I checked the weather forecast the next day. 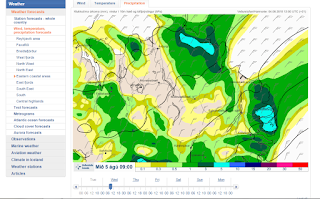 You say that turqouise area to the bottom right? That's where I was. Great. 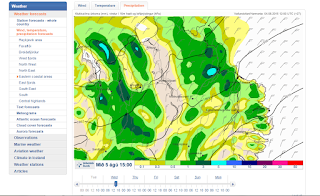 Thankfully though, the weather would dissipate as the day progressed. After conferring with Thea and  Þórður (who had also shown their concern) I decided to wait for the afternoon. 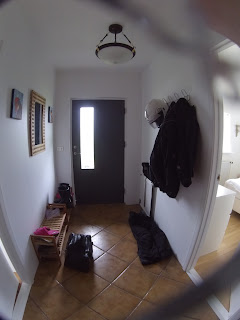 Then, it was time to bite the bullet. 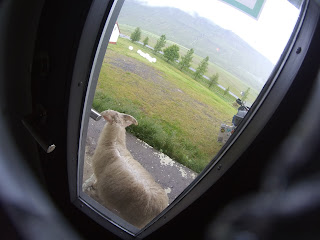 (even though some of the sheep rather had me stay)

The stay at Skorrahestar had been truly amazing, and an end befitting of the wondrous two weeks I had had in Iceland. If you're ever in the area, make sure to pay them a visit.

The drive to Seyðisfjörður was quite uneventful, really. There was a ton of rain, drizzle and fog, so even though I could've used the Drift, I probably wouldn't have been able to show you much anyway. 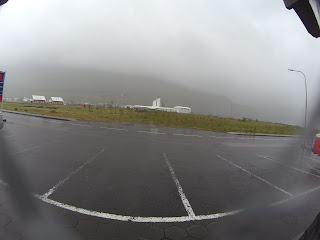 Before long, I found myself on all too familiar territory, with also the fourth and final mission of the trip completed.


The best thing about coming back in that same place after two weeks is that most of the bikers do exactly like you do - they spend the final night in the camp site closest to the ferry.

There's only one camp site in Seyðisfjörður, so immediately I ran into quite a few familiar faces.

(forgive the bad photo quality coming up - as it was still pouring down, I used my Sonim's awesome 2MP camera to shoot these) 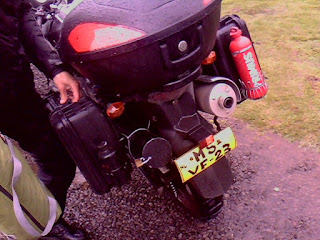 Like Giuseppe, who arrived shortly after me alongside Valentina and Luca, an Italian couple he'd met on the way. As it turned out, his license plate had vibrated off somewhere and he hadn't been able to find it back, so he had apparently arranged for a hasty replacement at (or should I say, from) the side of the road. 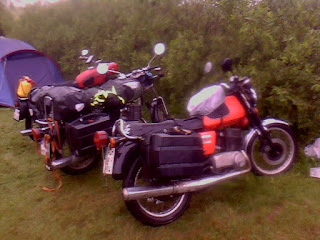 Other familiar faces were the three Germans on the 250 cc bikes. Awesome.

Niels, Dave, Reto and Andy were also there, amazingly. Niels took the cake when it came to war stories though - somewhere in the Highlands his Cagiva's frame had broken in 5 (!) places, and he had to then ride 80 km's of F roads to get back to civilization and get his frame welded. 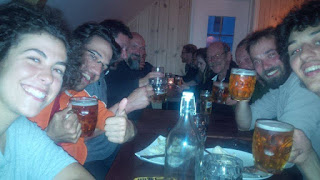 In the evening, all stories were exchanged in the local bar. From left to right: Valentina, me, Niels, Reto, Andy (on opposing side with glasses), Dave, Giuseppe and Luca. 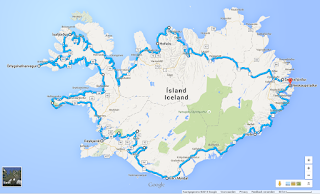 Time to sail back home. Takk fyri Ísland, it was a truly bewilderingly beautiful experience, to be remembered and savored forever.

Tomorrow, I will post the epilogue, along with a few tips and pointers for those who are thinking about going to Iceland themselves. And ofcourse, the trip compilation!