Day 9 - From Chiseldon back to Harwich, onto the ferry back home! 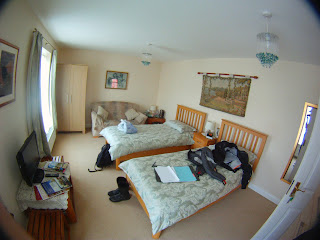 Waking up in Chiseldon, I knew today wouldn't really bring anything special to the mix other than the return to the place where I had set off just over a week earlier. Hostess Anne had read the usual poetic addition to my personal data, and before long we talked about the wide variety of writers we liked - quite nice departure from the normal scheme of things. 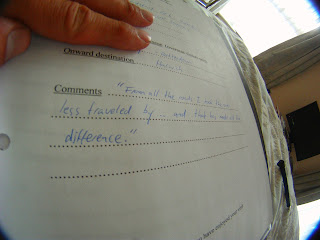 Yet another addition was made to the flag, after which I set off back to Harwich. And it went surprisingly quickly - thanks to my decision to leave London as it was (after a week of full-on touring, I didn't feel much for any more insane traffic) I found myself riding on the last road to Harwich within 2 and a half hours. Henceforth, the only thing I saw of the Olympics can be narrowed down to this: 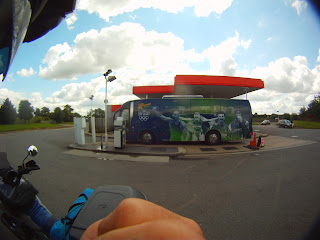 As I rode on the A120 toward Harwich, I was overcome by the realization that I was just a few miles away from finishing my multi-mile tour. Getting closer and closer, I found myself willing the beast onward, hoping the tires would remain OK for just a bit longer. 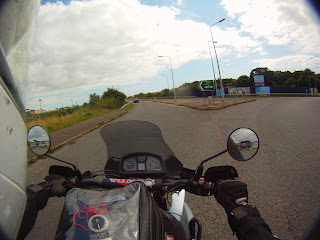 But just as it had been for the entire trip, there were no problems at all, and when I then suddenly crossed the same round-about I had turned upon on Friday the 13th just after leaving the ferry, the penny dropped. I was there. It had taken me just over a week, over 2000 miles, over a million midges and a crash, but I was there....and subsequently I had to do everything I could to keep the beast in a straight line. Before screaming my lungs out, I was absolutely lost for words.

Everything from that moment on felt as a victory lap. Just taking a breather on a beach parking lot wrapping my head around what I had just done, a lifeguard rolled up in his car, asking where I was going. Instead, I told him where I'd come from. 'Well done man', he said, after which he signed the flag, as well as helping me to take this picture. 'Can I ride my bike onto this hill?' - 'Hell, you can ride on the beach if you want!' 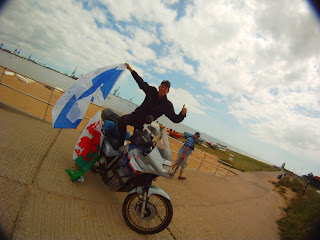 I sought to get myself a sticker of Great Britain for on the panniers, after which I rode to the same accommodation I'd stayed at a week beforehand. Time to set up camp, for the last time.

Eventually I was joined by three German bikers on their way to Ireland, as well as two Dutch ones on their way to Wales. The final night was spent in the Castle Inn's pub, exchanging stories before  it was time to hit the sack. 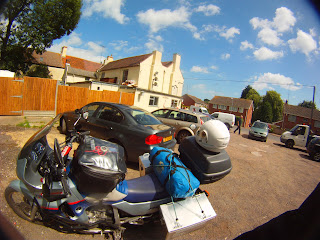 The next morning I took my time to pack up, said goodbye, and checked in at the port.

As I'd stopped to wait in line for the second time to board, I noticed one of my gloves was missing from the dash (I take them off when going through check-in so I can grab my passport more easily). I looked underneath my bike, but I didn't see it anywhere. Reluctantly I chose to walk back to where I'd come from, but before I did, I saw a small kid running into my direction from way back in another line. 'Mister, your glove!' he shouted, returning it to me. He ran back almost immediately, so I followed him back, bringing his family some of the project stickers as a way of saying thanks. 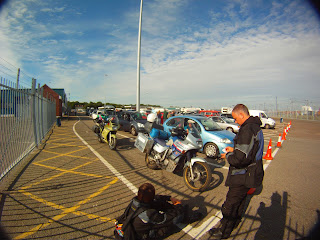 Before long I was joined by Wilfried and his son, who had just come from a meeting in Lowestoft, coming all the way from Hamburg, Germany. We talked bikes a little bit, before it was time to board. and as bikers are first to board (and I was the first biker) I was the very first on deck. And when I say that felt pretty awesome, that's because it was pretty awesome. Wheee!

Time to go back home after this adventure. It had learned me alot (more about that later) and in hindsight it has been a great adventure overall. The flag was pretty filled up as well, and upon arrival, I folded it up in the official triangular manner, and made a case for it using the roadbook I used during trip. 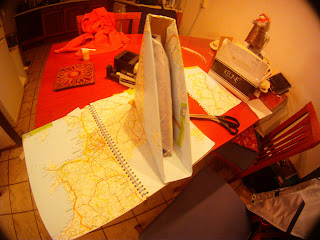 I must say, I previously feared whether I was really fit for doing this, but after the first day I was getting into the rhythm pretty quickly. I'm very much looking forward toward next year, when the final journey to Greece awaits. Most probably, I will depart on the same date as this year, taking 4 weeks for the entire trip.

+The weather
+North York Moors National Park
+Cairngorms National Park
+Loch Lomond National Park
+Lake District National Park
+Snowdonia National Park
+Northern Scotland
+That all of these places are biking playgrounds with amazing scenery
+Scottish people
+My crashbars. They saved me from some expensive damage...
+The reception (and send-off) I got from Saracen's Head
+Natalie, the receptionist at Premier Inn, Edinburgh East. She even helped carrying one of the panniers up (even though she first said she couldn't leave her desk - ha!)
+Pulling the bike out of the ditch with 7 people. At that moment I didn't really find it all that totally-awesome, but in hindsight it was one of those Paris-Dakar moments I'll never forget.
+The bike firing up after the crash. IT LIIIIIIIIIIVESSS!
+The bike being fine in general after the crash. It truly amazed me. Thank god for Japanese engineering.
+Having a watch on my handlebar.
+Having a compass in my tank bag. Saved me a few times.
+The way everyone responded to the trip and the project.
+Riding back into Harwich 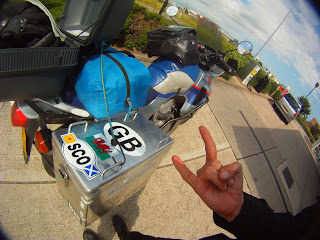 -Seeing the 'Welcome to Suffolk' sign three times in 1 afternoon, all on separate locations. I swear, somewhere around Cambridgeshire is a second Bermuda triangle.
-Midges
-Dropping my bike at two camp sites
-Crashing in Scotland
-Severe downpour on my way toward the Lake District. Thanks to the spray from the cars in front as well as my fogged up visor, I couldn't see more than just a vague dark blob in front of me which I clinged on to, praying no-one would be half-witted enough to make any sudden moves.
-Midges
-Junctions in Britain. Seriously, what is up with not-building a proper onramp or offramp to a services, so you don't have to do 70 to 15mph in 4 feet (or the opposite, even)?
-Trying to move a 450+ pound fully-laden motorcycle on loose gravel, whilst three (and when I say three I mean four, as the winter-lining in my biking-coat technically is also a layer) layers of clothing make my insides boil, an entire death squadron of midges blitzes me from all sides and the rain makes my visor fog up (which, ofcourse, I can't open to de-fog because it'll let the frigging midges inside)
-After the subsequent escape, realize I'd already paid for my breakfast at the camp site.
-My compass going into 'Jack Sparrow'-mode (i.e. pointing in all possible directions), when I was looking for the proper exit somewhere in the Lake District.
-Waking up as Shrek in the Lake District
-Soft ground in Harwich, the second time I got there. My side-stand just sort of...disappeared into the ground entirely, forcing me to lay the bike down.

>If you're going to camp in Scotland in summer and there isn't any wind, move somewhere else.
>Really, just move. I don't care if there's an armada of Swedish sunbathing models staying there - it isn't worth it. (Okay, maybe that's a bad example)
>Just because you're allowed to go 60mph everywhere, doesn't mean you can or should.
>Don't ride more than 200 miles on a day. Not only does it drain you if you do (one time, my left leg even fell asleep on the bike), it also eats away at the time you have at each destination - this trip, riding usually started at 10am, and stopped at 6 pm.
>If your bike is sitting directly straight upon the side stand, don't stand behind it like an ass but move it, because it *will* fall over
>Be patient with the way Northerners speak English.
>Just repeating what Gary told me at Squires as it proved pretty valuable: whenever you can fill up in Scotland, fill up. You can easily go over 70 miles without seeing any civilization, let alone a fuel station.


Finally, here's the compilation of some of the best footage I shot whilst being on the road. I put it on the index page as well. Enjoy, and see you guys soon!