So what route is going to take me to Greece? The jouney will take me through Belgium, Luxembourg, Germany, France, Switzerland and Italy before crossing the Adriatic Sea to Greece. On the way down (and back up), I'll ofcourse take my time to check out all the places I'm passing through.

Below, there are basic (but clickable!) Google-map overviews of the route to give you an idea. Mind you, everything is still tentative, so adaptations could well be in order. 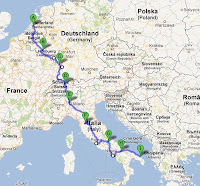 The route down is set to take place in around 9 days, from the 19th of July to the 28th. Day destinations include: Bastogne, Haguenau, Zürich, Milan, Florence, Sulmona and Brindisi, with room for an extra stop along the way.

In Brindisi, I'll board the ferry towards Greece, and from that moment on I'm likely to just take it as it comes. 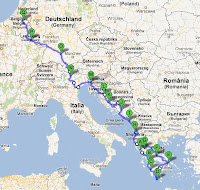 The route back up

The road back therefore takes a different approach - I deliberately left alot of play in it (some of the legs are shorter than 150km), so that if I want to stay another day at a particular place I've got the freedom to do so.

Depending on how the ride goes, I plan to be in Athens at the start of August, entering Albania at the end of its first week. I've learned from the trip in Great Britain that I liked having a set destination each day, as it helps settling into and maintaining the daily rhythm.

Now I can hear you thinking: "Why the cape?" Well, to me it bears a special kind of significance. Back in the old days, people told stories about persons who visited the deceased in Hades, the Ancient Greek underworld. One of the gates to it was located at the Cape, enabling them to descend into the realm of the Dead.

Given the origin of the project, I liked the symbolism behind this particular destination. It's also the southernmost point of continental Greece (and subsequently of the trip), so I reckoned it to be the perfect place to turn around and head back home.