So why am I doing all of this?

Basically it all started when I was just 10 years old, and one of my best friends at the time (aged 11) died by suicide. Because of this happening so early in my life, I always thought of death as a normal thing. I had grown up with it, so to me, it had become just as normal as sunshine and rain. Why people made such a fuss about it, I never really understood.

Thirteen years later however, in 2009, the penny dropped. For a college course I did research on mourning high school students, and eventually it dawned on me that these things weren't normal at all. As a result, everything that had happened back in 1996 came back, and hit me in the head with a gigantic sledgehammer. On more than one occasion I doubted whether I'd ever see the end of the depression that followed - a period that I can now only describe as by far the darkest time of my life.

Thanks to the love and support of those close to me however, I was able to sit out the storm. Six months it had taken me, but in May 2010, just weeks before my older brother's wedding, the dust settled, and I could finally look forward again.

In the summer that followed, the Dutch national football team rose to glory (or shall we say, near-glory) and I got my hands on a team jersey. I just needed a number to go underneath my name though, and the obvious choice was thirteen: the number of years I had lived in ignorance, not fully realizing the impact of my friend's death in 1996.

Therefore, the number 13 has become a symbol of endurance and perseverance for me. To never surrender, to never give up. To celebrate life, and commemorate death. To treasure family and friendship, and to embrace my blessings, rather than fearing my shortcomings. Thirteen years, thirteen reasons.

I then set out to make a lifelong dream reality: see the country I'd been inexplicably been obsessed by since childhood. Greece. And to make matters a bit more complicated, I chose to ride there, by motorcycle... even though I had neither a license or a motorcycle. Still, I was going to do it, no matter what. This became known as The Dekatria Project. 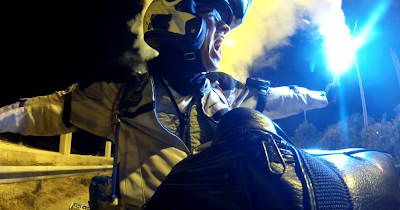 And in the Summer of 2013, I made it. 3 years earlier I hadn't even sat on a motorcycle at all, but there I was, in the country of my dreams where I'd ridden to all by myself. After getting home, I realised I was hooked. I was going to keep doing this.

So the next stop is going to be Iceland. I'm not a big offroader by any standard - I'm still way out of my depth getting near gravel, even though I encountered some unpaved madness in Albania. But the country is home to what Icelandics in medieval times saw as the gateway to the Underworld: Mount Hekla... and after seeing Cape Tenaron in Greece, this seemed the right choice. Time to, once again, ride to Hell and back, remembering the struggle against myself in early 2010 and those who haven't been as fortunate as me.

But why don't just buy an airplane ticket and have a quick weekend? I hear you... but I feel that's too easy. I
personally feel that the journey is at least as important as the destination, and that I owe these trips to my late friend as well. I owe it for those 13 years, I owe it to myself, and I owe it to all of the people who can't make journeys like these anymore. I want to keep pushing myself, get out of my comfort zone, and see what I discover.

So all of this - these are the reasons I want to ride thousands of miles on two wheels.... even though it makes my ass sore after a few days.

In any case, keep on the look-out for updates!