The past few months I got various people asking me about the kit I use. Therefore, I thought I'd use the final three months step by step to show you around, starting off with my personal apparel. Let the shameless plugging begin!

The helmet is a Shoei Neotec, one of the latest flip-up helmets out there. I use a flip-up primarily because I wear glasses, but in Britain another upshot was that it allowed me to take a bottle of water out of the tankbag and have a drink while waiting in front of traffic lights. Yet another one of those little things making life on the road easier.

Now, the Shoei is twice as expensive as the Nolan N90 I used before, but when you wear it you notice why - it's better in all those little things. It's got less windnoise, is better made, easier to operate and to me it's more comfortable as well. It just feels more solid and dependable (with the added bonus that it looks better too, heehee). 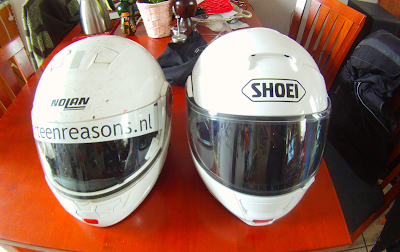 One big upshot in my eyes is the way the vents operate. This may seem irrelevant, but on the road, the less time you spend occupied with something other than riding, the better it is. Now as you can probably tell, the Nolan's vents are really small, making it a real pain to find them when you're going 60 mph.

The vents of the Shoei however (the slide up top and the wide button under the visor) are big, so a doddle to find with gloves on. This in turn makes opening them easier and safer. I tried fitting the comparable Schuberth as well by the way, but as it is with most brands the way it fits differs between manufacturers. In my case the fitting of the Schuberth was off and the vents didn't operate as easily, so I didn't go for it. 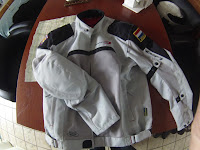 One of the biggest issues this Summer however will undoubtedly be the heat of well over 30 degrees Celsius. I know that my regular black all-weather suit won't be sufficient, so this Summer I'll be riding in the suit to the right.
It's from the same manufacturer as my regular suit (which has survived me for over 2 years, so quality is solid) and has got all the necessary protection... but that's where similarities end. 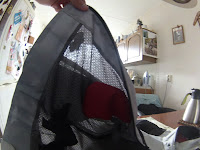 For starters, it's light-grey instead of black, so heat absorption is reduced to a minimum. Furthermore it has no weatherproof lining of any kind making it easily twice as light and it has ventilation mesh all over it.
This last thing (besides making the suit nearly see-through in some places) enables wind to go right through, hopefully making the heat a bit more bearable.

For maximum benefit I'll also be wearing a cooling vest underneath, and to deal with any possible rain I'm bringing the same basic rainsuit I took with me going to Britain. I can just stop by the side of the road, put it on and wear it over my riding suit if need be. Clothing-wise, I'm keeping it simple with polyester t-shirts and trunks as those are easier to clean and dry (and seem to help with heat dissipation).

The only thing I'm not too sure about is a possible drinking system. I have a Camelbak at my disposal but riding with a backpack only works on short distances for me. In endurance riding, these small things matter the most; if something is a minor irritation at first, it will drive you absolutely batsh*t insane after a few days on the road... so I'm thinking of just having a larger waterbottle in my tankbag (or a second one at that). 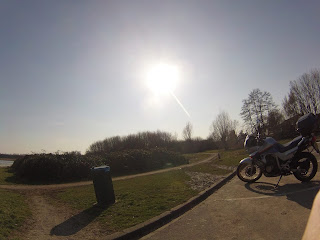 As far as boots and gloves go, I use the same leather kind as I've always used. The skin of my boots has already cracked at certain places (it's still my first and only pair), but the way I see it, a little extra ventilation is never a bad thing in this case.