The days are passing by, the miles are racking up, and so have the physical preparations for coming Summer. I'm trying to get into shape, as I noticed the past month that the endurance-touring stamina seems to be lacking somewhat.
I need to be careful talking about this though, as some may take it the wrong way when the topic of conversation is all about sore asses, rack adjustment, vibrations between the legs and painful right arms (let alone doing a ride with a sheepskin...).

Anyways, I'm also tightening the last nuts and bolts on the beast as well. Just last week I got new spark plugs in, making it the fourth week in a row that I got the spanners out. Felt sort of weirdly satisfying to see the beast undressed... (there you see, I did it again!). Only jobs left are the oil and oilfilter, along with the wheelbearings and tires (which the garage will take care of a week prior to departure).

I'm trying to get used again to riding three-figure journeys on a day, by lapping up some bigger trips during the weekends. Recently for example I met up with Gary, whom I met in Britain last Summer. He and his significant other are going to get married this July, and Gary had invited me for his stag-weekend in the North of the Netherlands.

During the ride north I took a break at a petrol station beside the freeway, and walking back from the shop I got a feeling I recognized from the Tour through Britain. On the road, halfway a big daily journey, with nothing but the bike to keep me company. There and then, eating a roadside sandwich next to the beast, it already felt like holiday to me. 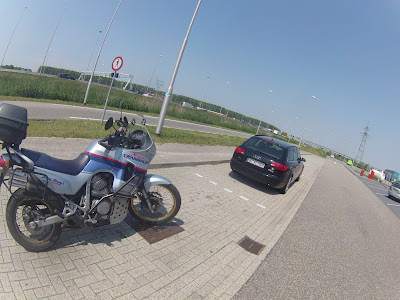 By the way, I still think the beast looks better with its top on... sort of leaves things to the imagination, doesn't it?
Gepost door Greg op 22:58