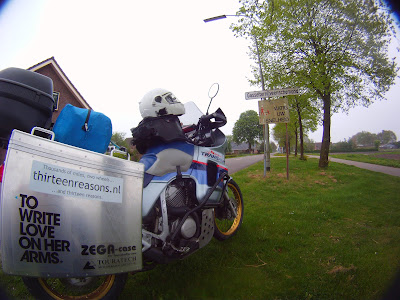 In preparation to the longer journeys to Great Britain and subsequently Greece I thought it would be wise to make a smaller trip in the Netherlands. As I have to average around 250 kilometres a day in Britain, a destination somewhere in the north of the Netherlands was an obvious choice. It coincided with the birth of my brother's baby boy as well, so the first stop would be his home, around halfway the route. On the 2nd of May, I set sail for Northern Territory.

The road to the North went pretty well. The sun was shining, I was in my element, and because of the nice spring temperature alot of insects were in their element as well, before burying themselves into my visor, helmet, panniers and motorbike. Thank god I didn't open my visor anywhere on the route, hahaha...

Thanks to a decent preparation, the navigation went pretty smoothly and before long I found myself riding through the entrance on the camping site of Motorcamping 't Witveen in Friesland. Earlier, I had phoned them to check whether they had any space, but as I arrived it turned out to be an irrelevant question. As it was a normal working day for most Dutchmen, the field was deserted, so I could pick any spot I wanted. The owners (and both avid riders) Jan & Hinke were really hospitable, and even welcomed me into the warmth of their own home since I was the only customer for the night. 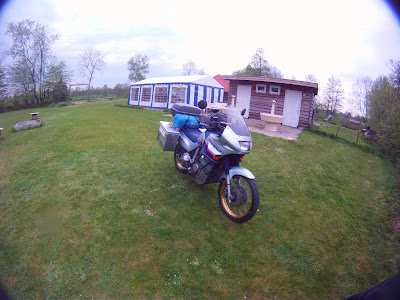 The night itself was cold but doable, and the next day (after accidentally deleting all footage en photos from the day before, d'oh!) I set out for the next stop - Motorcamping De Motorschuur in the aptly named village of Gasselternijveenschemond. The route towards it was a bit complicated even though I'd carefully planned it, and soon enough I lost track of where I was. But that didn't seem to matter at all... I enjoyed just being out there, riding around through curiously named villages with everything I needed on my beast. It liked the basic, explorer-like feel of it all... and after consulting a road-side map, I rode towards my destination. 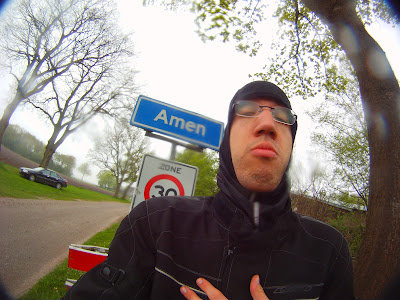 Upon arrival at de Motorschuur, I was greeted by the two dogs of owners Gijs & Madeleine. I could once again pick any place I wanted on the camping field, and soon enough, Dekatria-HQ was up and running again. I had no fuel as of yet for the Primus stove, so after a much-needed afternoon nap, I put the topbox on the Alp and rode towards the nearby town of Stadskanaal to get the necessary supplies (and to find out the football scores, as I'd been living in a TV/internet-less bubble for almost two days). Primus stoves work on pretty much any flammable liquid, so I got some methylated spirit from the convenience store and rode back.

Upon returning to the camping site two Danish men had arrived on Yamaha XJs -  Jøargen and Fleming. They were travelling from Denmark to the Morgan factory in the UK, and up until supper time we kept one another entertained with a plentiful amount of stories. 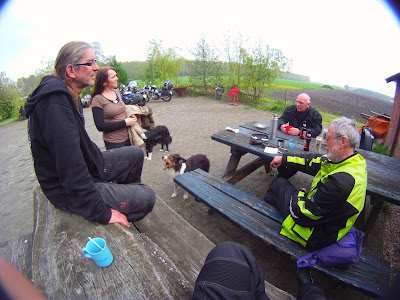 Then, it was time for dinner... so time for FIRE! After some fiddling I got the Primus working, which resulted in a victory-lap through the premises. LOOK WHAT I HAVE CREATED! Both me and my sense-of-self-accomplishment joined the rest at dinner, and afterwards, we talked by the fireplace until it was time to sleep. A good end to a good day.

The next day had rain, which was exactly what I had ordered. This may sound weird, but as I expect to be riding through rain in the UK (because well, it's the UK) I wanted to get this bit of fully-laden riding experience in as well. I shook hands, and went on my way.

However, the entire road back home I got mullered by a strong head-on wind, which eventually wore out my right upperarm despite taking frequent breaks. I chose to stop at my brother's place for half an hour as the pain had gotten unbearable, but 20 kilometres after continuing my journey, the pain was back. I wanted to avoid rush hour though, so until I reached my hometown of Rotterdam I soldiered on, riding 80 km with an arm that felt as if it was going to fall off. 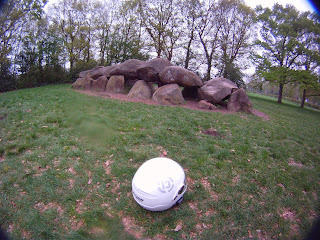 Despite this, I really enjoyed the trip. I got to do everything that I wanted (which includes riding through rain with the fully-laden Alp), the bike's layout turned out to be nearly as good as it could get and doing 250km a day was less exhausting as I feared it to be. All in all, it was a right success, and I'm really looking forward to July. See you on Friday the 13th!

A full photo gallery can be found on the project's Facebook page (<click!). Here's a compilation from the trip's footage!